Jeanne, a 22-year-old student, claimed male staff at the Orsay museum in Paris, France, “stared” at her breasts and asked her to cover-up her low-cut dress before entering.

She published an open letter on social media explaining how much she felt “discriminated against” on the basis of “sexist dynamics” by the museum’s security personnel who prevented her from entering.

The Musée d’Orsay, on the Left Bank of the River Seine opposite the Louvre, aissued a press release last Wednesday. September 9, saying it “deeply regrets this incident”. It apologised to Jeanne and said a receptionist had been spoken to about his behaviour.

In spite of the apology, Jeanne’s open letter sparked a feminist backlash against the museum and women protested by going topless at the museum on Sunday, September 13. 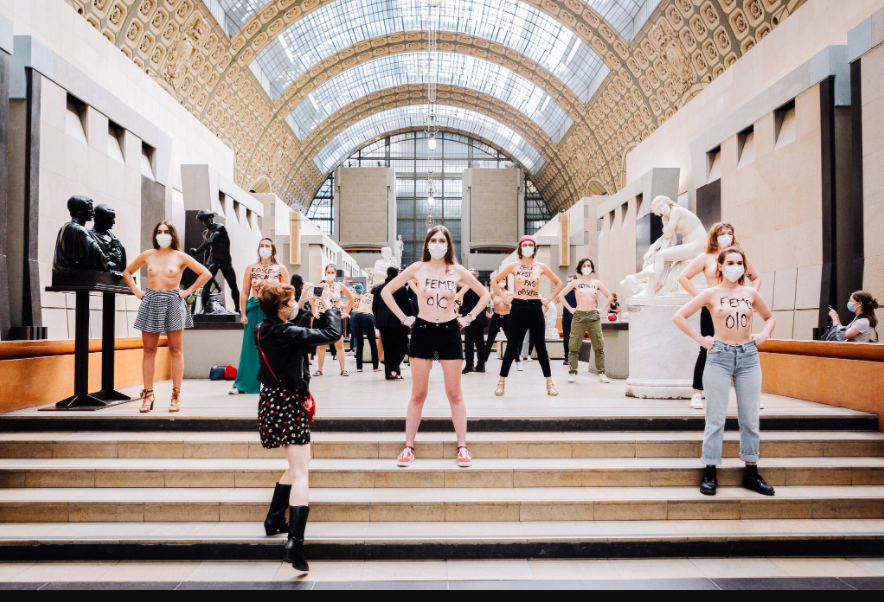 In a clip shared by FEMEN France on Twitter, semi-naked women with slogans on their breasts hold up placards and shout that their boobs “are not obscene”.

Wearing face masks and standing a little apart, about 20 women punch their fists into the air in unison as they chant.

Activists also shouted the “female torso is not obscene” and they support “Jeanne and all women who are the “victims of sexist discrimination”.

In a statement on Twitter, FEMEN wrote: “The obscenity is in your eyes!

“About 20 Femen activists took a topless tour of the Orsay Museum today.

“Stop the sexualisation of women’s bodies!”