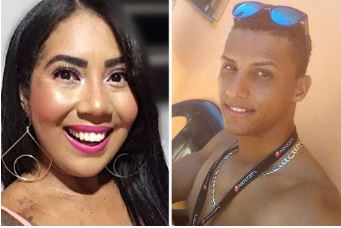 She stabbed the man during a row that broke out when she found him with another woman.

Diana Rosa Santos de Jesus was arrested in the north-eastern Brazilian municipality of Itabuna on the night of April 7.

She is said to have confessed to cops to killing her ex-partner during a row earlier in the night.

Police ordered for her “preventive detention” on April 8, and she was transferred to prison on April 14.

The crime is said to have taken place at the house of the victim, Odlairan ‘Iran’ Ribeiro dos Santos, 29.

The couple had ended their three-year relationship two weeks earlier but had continued to see each other, it is reported.

On the night of the crime, Diana turned up at Iran’s house, where she found him with another woman, and a row ensued.

In the heat of the moment, Diana allegedly grabbed a knife and plunged it into Iran’s neck.

It is claimed Diana herself then asked for help, and locals called the emergency services, who arrived at the scene only to find the victim already dead.

He was buried at the Campo Santo Cemetery in Itabuna on of April 9.

Despite confessing to police that she had killed Iran, Diana claimed to officers that she had grabbed the knife in self-defence.

She claimed she only stabbed him in the neck when he lunged to try to grab the weapon off her.

The investigation into the crime is ongoing.

Earlier this month we reported that a jealous husband stabbed his wife of 34 years up to 300 times when he mutilated her in a “barbaric” killing.

George Leather, 60, used four different knives to inflict around 100 wounds to the face and head of tragic Paula Leather, who sustained injuries so severe she could only be identified by a tattoo and the watch she was wearing.

A court heard that the much-loved nan was unrecognisable when found at the foot of the stairs in the family home in Prescot, Merseyside, the Liverpool Echo reports.

After breaking numerous blades in the attack, callous Leather left his 56-year-old wife for dead and went upstairs for a shower.

He denied Paula’s murder and had been due to stand trial but changed his plea to guilty at Liverpool Crown Court.

Jailing him for life with a minimum prison term of 18 years, Judge Andrew Menary QC said: “It was an episode of unspeakable and barbaric savagery.”

The couple had been together for more than 40 years and had three adult children and one grandchild during their 34-year marriage.

In the early hours of November 16 last year, Leather’s brother Peter received a call saying “he had better get round” to the couple’s house.

‘Cabal More Powerful Than Osinbajo, He Appointed Me NSITF Chairman But Cabal Reversed It’ – Frank Kokori