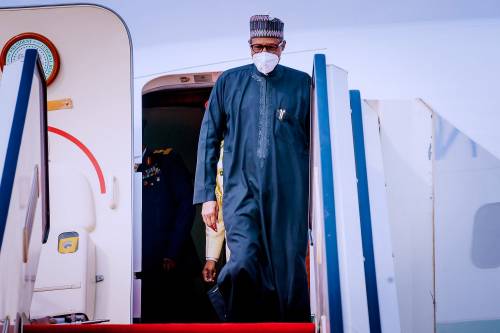 Nigeria’s number one man, President Muhammadu Buhari’s incessant travels to the United Kingdom for medical treatment have taken a total 200 days or about seven months since he assumed office in May 2015, according to SaharaReporters.

In his current trip, Buhari who went to the UK for “a summit and scheduled medical follow-up” is expected to be back by next week which makes it over 200 days.

Buhari’s penchant for foreign medical help is in stark contrast with the ongoing, biting doctors’ strike in Nigeria which has paralysed government hospitals and put the lives of millions of ailing Nigerians in the balance.

The latest medical trip to the UK is Buhari’s seventh since he was first sworn into office on May 29, 2015.

By the second week of August, when the president is due back, he would have spent about 200 days in London on official medical trips.

SaharaReporters had on April 1 reported that Buhari spent over 193 days on medical leave in the United Kingdom since he assumed office in 2015.

Only in April, Buhari went to the UK for same treatment, according to a statement by his Special Adviser on Media and Publicity, Femi Adesina.

SaharaReporters had examined a timeline of the president’s trips abroad for medical treatment since he assumed office on May 29, 2015.

He reportedly flew to London on June 6 to see an ear, nose and throat specialist after two doctors in Nigeria recommended further evaluation “as a precaution”, his team said.

He extended his trip by three days to rest.

The Presidency announced he would be working from home.

In 2019, the president embarked on a 10-day private trip to the UK suspected to be for medical reasons.

In 2020, the president could not make his trip due to the coronavirus pandemic which caused a halt in flight operations.

In the first three years of his first tenure from May 2015 to May 2019, he was outside the country for a combined 404 days – one year and 39 days in 33 countries, which was both for official and medical purposes.

‘My Family Cut Me Off Financially’ – Prince Harry

My Biggest Challenge At PSG – Lionel Messi Opens Up