The youth wing of the apex Igbo socio-cultural organization, Ohanaeze Ndigbo, has written to the Chief Judge of Federal High Court of Nigeria, Justice John Tsoho, on the continued incarceration of Mrs. Onyekachi Orji, for the past 15 years.

DAILY POST recalls that Orji is one of those incarcerated in the federal correctional center in Onitsha on the accusation of violent agitation for Biafra independence by the Biafra National Guard (BNG).

In a letter dated November 12, 2021, signed by its acting National Youth Leader, Mazi Onwuasoanya FCC Jones, which a copy was forwarded to DAILY POST on Monday, the Ohanaeze youth wing, drew the attention of the jurist on their frustration with the delay in dispensing justice in the case preferred against Orji and 18 other Igbos by the Federal Government of Nigeria.

The Igbo youth wing regretted that the delay in delivering judgment in the case against the Igbo citizens has led to their irretrievable loss of some precious time of their lives.

The Ohanaeze youths further regretted that the past 15 years might have been enough to exhaust all legal remedies open to them, up to the Supreme Court, but sadly they are still waiting for the verdict of the court of the first instance.

The Ohanaeze wing, however, appealed to Tsoho to use his good office to prevail on the presiding Judge to ensure that the judgment is delivered. 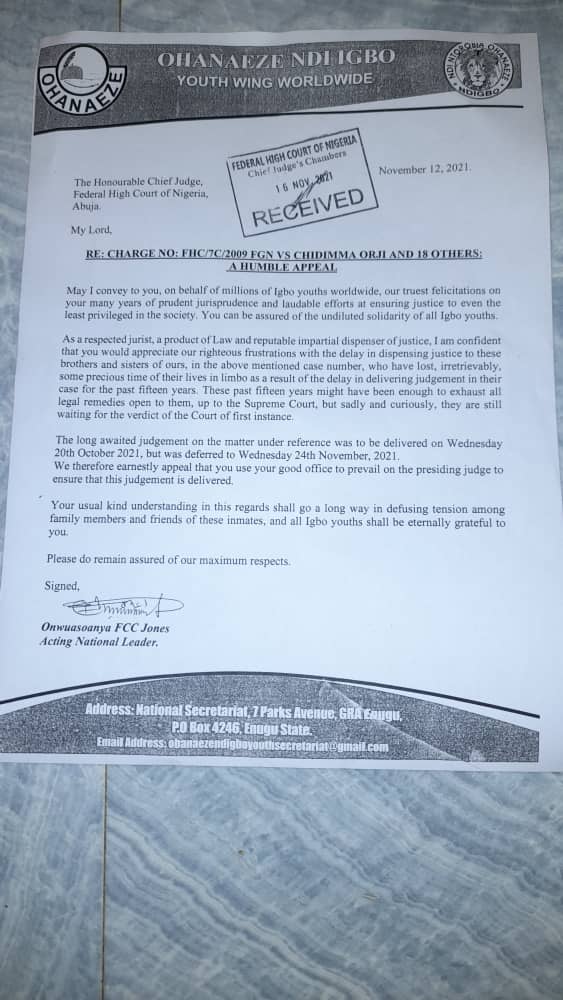