Skip to content
The women, Jascent Nakalungi and Sharifah Namaganda said to be cousins, were intercepted by the Delhi unit of the central probe agency on January 28 after they landed at the Indira Gandhi International Airport in India. 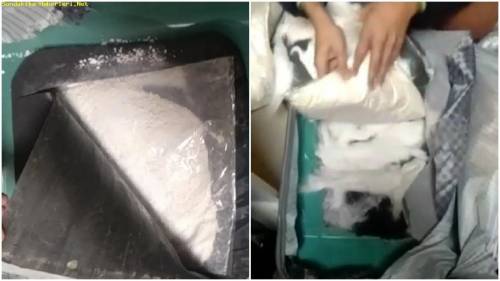 Reports show that a Nigerian man, identified as Kingsley, and two women from Uganda have been nabbed in India.

They were arrested with nine kilograms of narcotics by police in India.

The country’s  Narcotics Control Bureau (NCB) busted the smuggling network, according to a report by Outlook.

The women, Jascent Nakalungi and Sharifah Namaganda said to be cousins, were intercepted by the Delhi unit of the central probe agency on January 28 after they landed at the Indira Gandhi International Airport in India.

According to the NCB, the two women had a medical visa for the treatment of Namaganda.

The duo was apprehended based on the agency’s inputs following a drugs case detected in December wherein over five kg of heroin was seized and two Indians were arrested.

NCB deputy director (operations) K P S Malhotra said, “A total of 8kg of heroin and one kg of cocaine has been seized from the women. The drugs were hidden in their luggage bags that were handed to them in Uganda.”

Kingsley was also arrested after the women’s leads were followed, Malhotra said.

“The case reflects the standard route employed for trafficking of cocaine, which is manufactured illegally in South American countries.

‘The seizure of heroin from this network points towards the reverse route of heroin trafficking. The intensive measures by border guarding forces, both at the northwest frontier and the high seas, have compelled drug traffickers to divert their loads towards Africa’s horn, which is Mozambique.

“Heroin concealed in various shipments then reaches other parts of Africa, where the organised syndicates arrange the carriers.

“Subsequently, human couriers transport the drugs to India by adopting various ways like hiding the narcotics in the body cavity and by concealing in baggage among other methods, ” Malhotra noted.

Lesson on character that will shape your destiny